One roll with... Kodak Tri-X disposable

Reduce, reuse, recycle. All of that in a capitalist society, where you're constantly bombarded with advertisements; where companies with massive marketing budgets try to nudge your perception to consume product and get excited for new product. While also trying to convince that the company is commited to ecology, everything is recyclable, and besides, you should bear the responsibility for the planet.

But why the disposable?

And yet disposables are still a thing. Deplorable from one perspective, but... when you have the masculine urge to do some street photography without much care in the world, it can work. Or maybe you're in a photography store and you have the feeling you shouldn't leave empty handed... The price was low - 14.10USD after tax - and Kodak is expensive, so that's barely over the cost of the film itself. I usually wouldn't buy a Kodak product, but there was no HP5 disposable in sight, unfortunately.

And it's an interesting market. Tells a lot about our society, if I may use the cliche. There's market for disposables, obviously; for people with an actual social life to "capture the moment", mostly. They could be using their phones, but nah, film hits different. Black and white disposables though - who are they for? I feel like it's a different group. Hipsters of hipsters?

I got it because I wanted to do some film street photography - as I had two Fujis with me: GS645S and X-S10. The former is a bit fiddly and I had "good film" loaded in; the latter is a great camera, but the action of taking it off the Ulanzi backpack mount takes a while and holding it in my hand all the time gets a little tiring. And it's digital! Bleh.

The disposable fits in my back pocket and it's super light. Or maybe it's all buyer's remorse and the original reason of "didn't want to leave B&H Photo empty handed" is true... 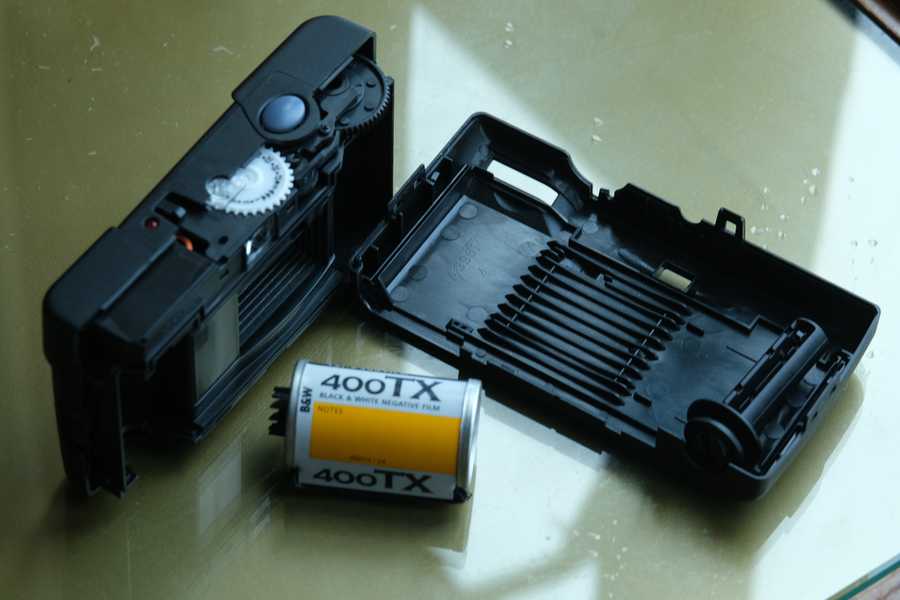 You deposit your money and you're free to go. The deplorably disposable nature of the product begins immediately - you need to dispose of the cardboard box and the foil it was wrapped in. On top of the camera you have your flash ready LED, shutter button, and frame counter window reminding you that the end is near. For someone used to shooting rather expensive medium format slides, 27 pictures can go quickly; but I'll do my best to ration them out.

The front of the camera has the lens and a button to enable the flash. I haven't used the flash during my roll as it was a lovely, sunny week in New York, but I tried it after I took the film out - it seemed to stay enabled for few shots. And once in a subsequent roll, back home. Turns out the flash is available for a while - sounds like the button charges the flash capacitor, and it over time just discharges itself if you don't use it. Super simple, but means you cannot switch between flash pic and non-flash in a jiffy without covering it with your hand, maybe. 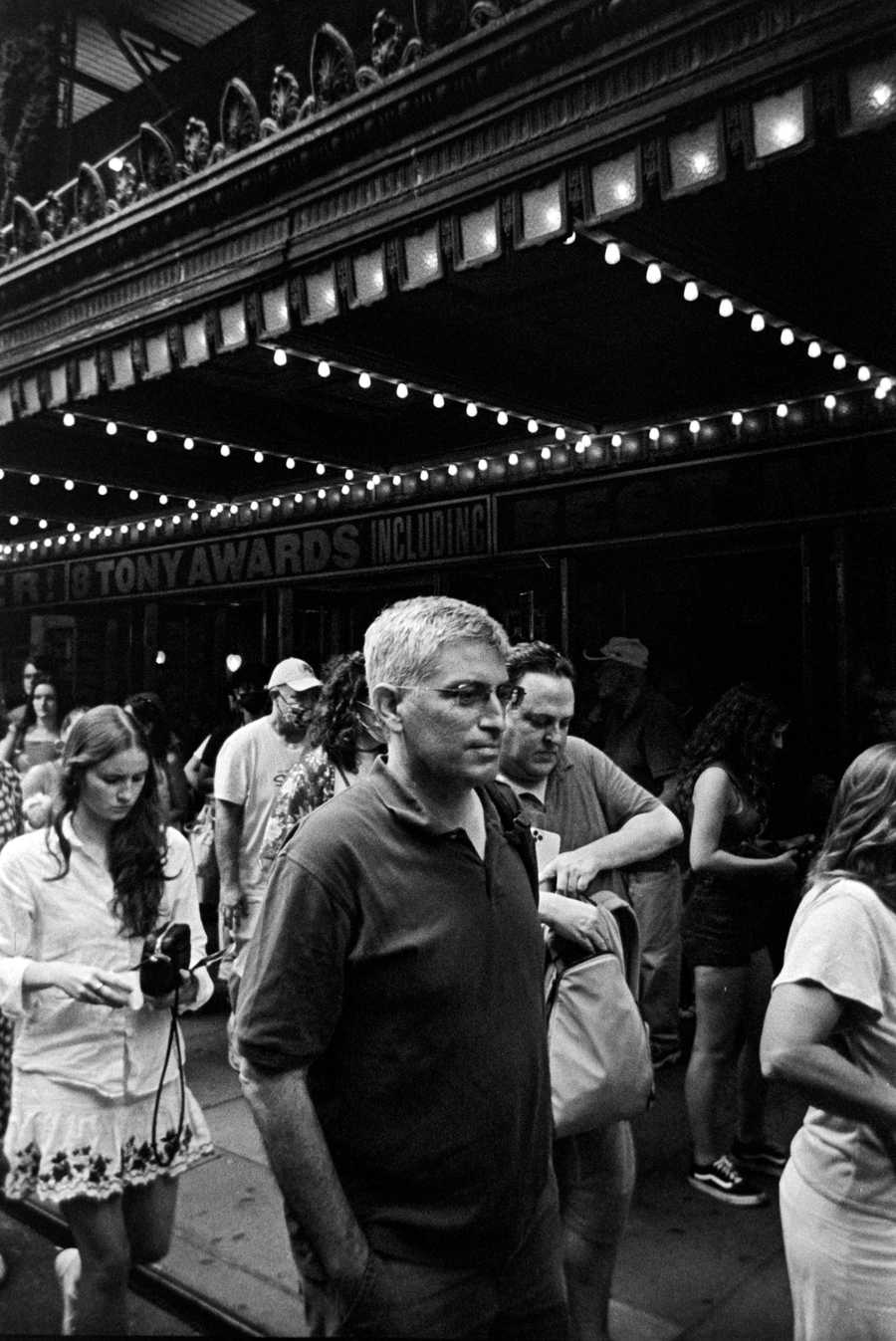 The back greets you with instructions (who reads these anyway?), the viewfinder - which is bigger than Olympus Mju-I's, and the advance wheel.

The entire shape is quite compact and light; although I did buy at one point a disposable lens adapted to L39 mount for Canon P, that's a much more convenient option. There's even something akin of a grip. Much better than a Leica which is just a brick. 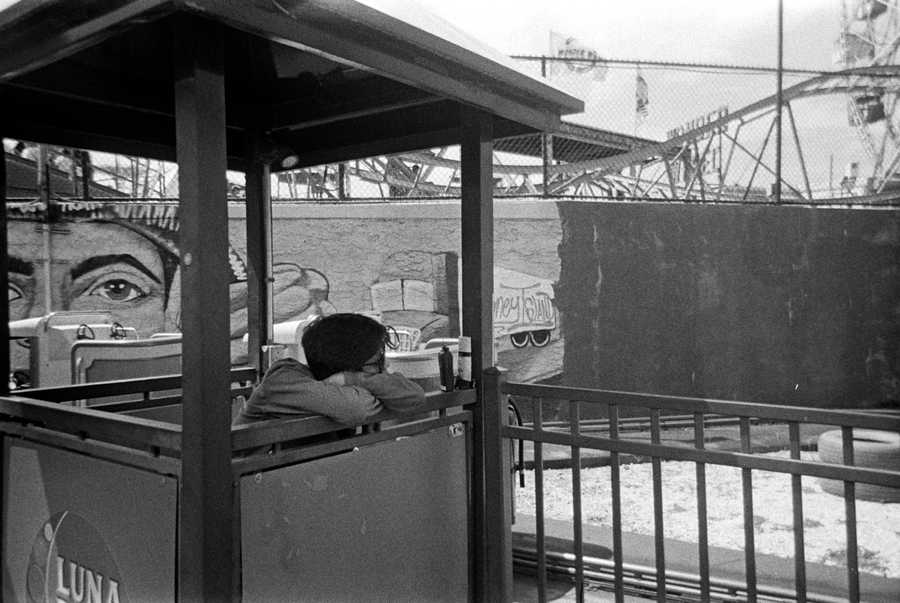 It's so quiet it won't wake up a sleeping worker! Tri-X

One more thing that's better than a Leica - it's very quiet. Not so quiet that you don't know yourself it has fired, but quiet enough to be drowned in the sounds of big city. Plastic shutter, covering image from a plastic lens, in a plastic shell... it has its pros. Of course you can't say anything good about the "feel", but you're not supposed to. And even with the yellow stickers all around it feels quite low-key. Maybe because I was wearing more professional cameras around me, strangers' focus would be on them, rather on the toy in my hand. Or maybe New Yorkers don't really care.

The only loud part is the advance wheel, but you can shoot and wait with advancing until you're away.

I took two days to go through the initial roll - just because I didn't want to shoot everything in one location. 27 shots later... you're done. That's it. With the disposal you have to wait a bit though, you still need to get the film out. The good thing it's black and white film so you can easily do the development yourself; the bad part is that you can't reload it as easily as you would any other camera. 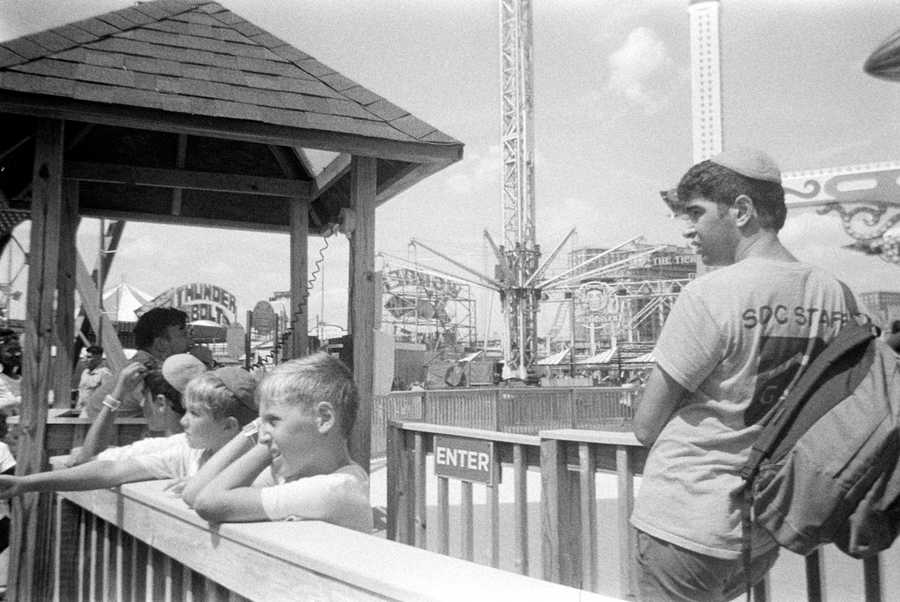 On the side... maybe, still don't want to risk upfront shooting. Tri-X

Opening it is simple enough, but you won't be doing it in the field. Remove the yellow stickers, put a credit card below the tabs on the side, pull apart, done. And putting it back together looked simple, so I thought that I would surely try it again with a normal film, such as Ilford PAN 400 or HP5. Maybe I'd be concerned about light leaking, but I would just see how it goes. 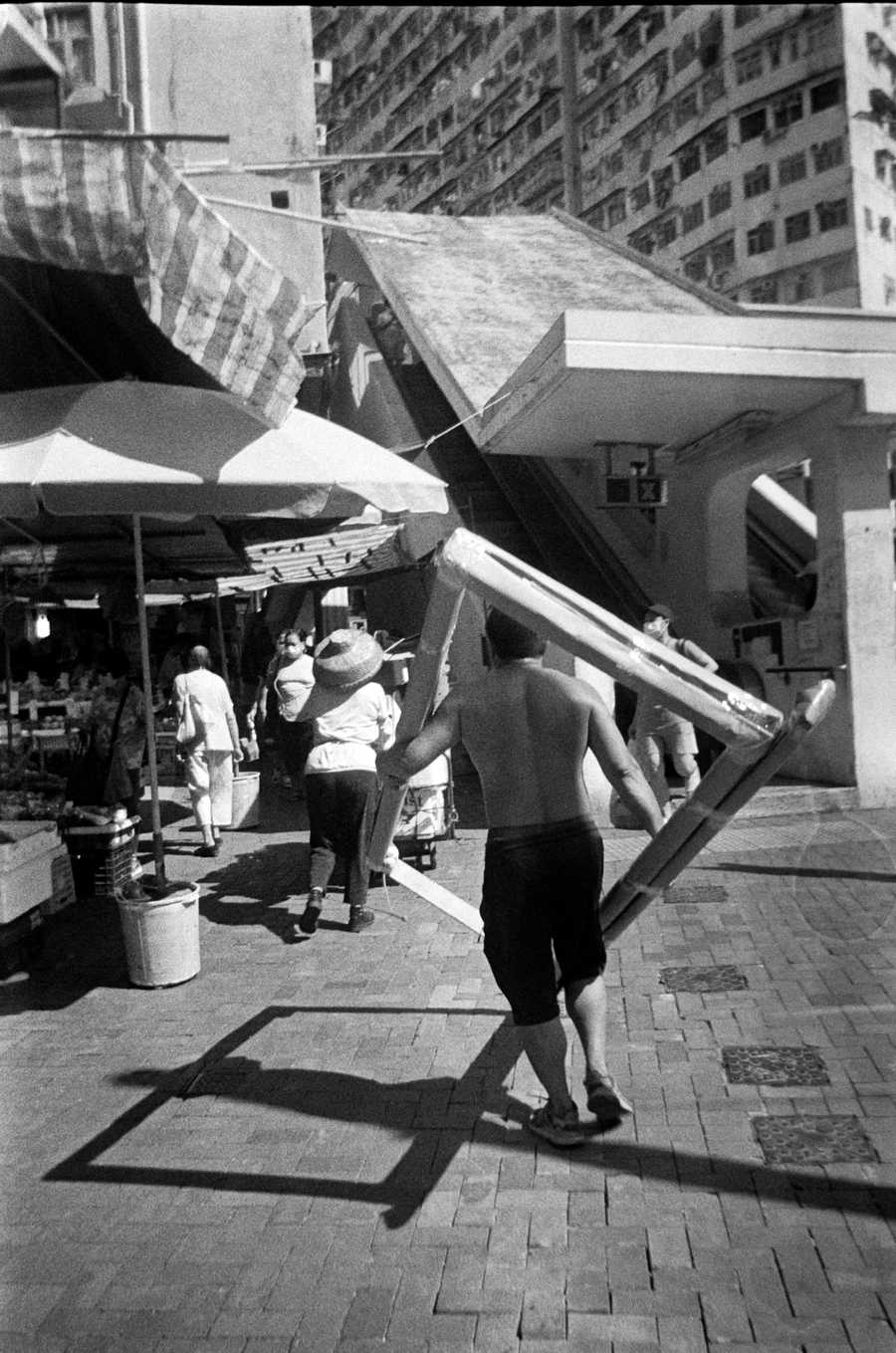 I wouldn't have taken this shot with any other camera - this one I just had in my pocket, ready to go anytime. Ilford PAN 400

Well - I did come back to the camera few days later - with Ilfopan 400. Results with Ilford? Probably better than Kodak. The loading process was easy, and the only problem is by not doing it in a dark bag, you lose... a bit of the leader, I suppose. And need to mark the frame counter at 7 (yes) so it rolls back and ends in zero. Pro-tip - before loading, cock the shutter for an additional pic.

Speaking of leader - surprisingly, the loaded Tri-X also had fogged leader, which makes you wonder about their manufacturing process. The film must be rolled into cassettes with leader sticking out, them transported in daylight, and then getting loaded in the dark again.

Well, it's a two element lens, and the field curvature of it is so bad, the film in the camera is curved, shaped by the back. 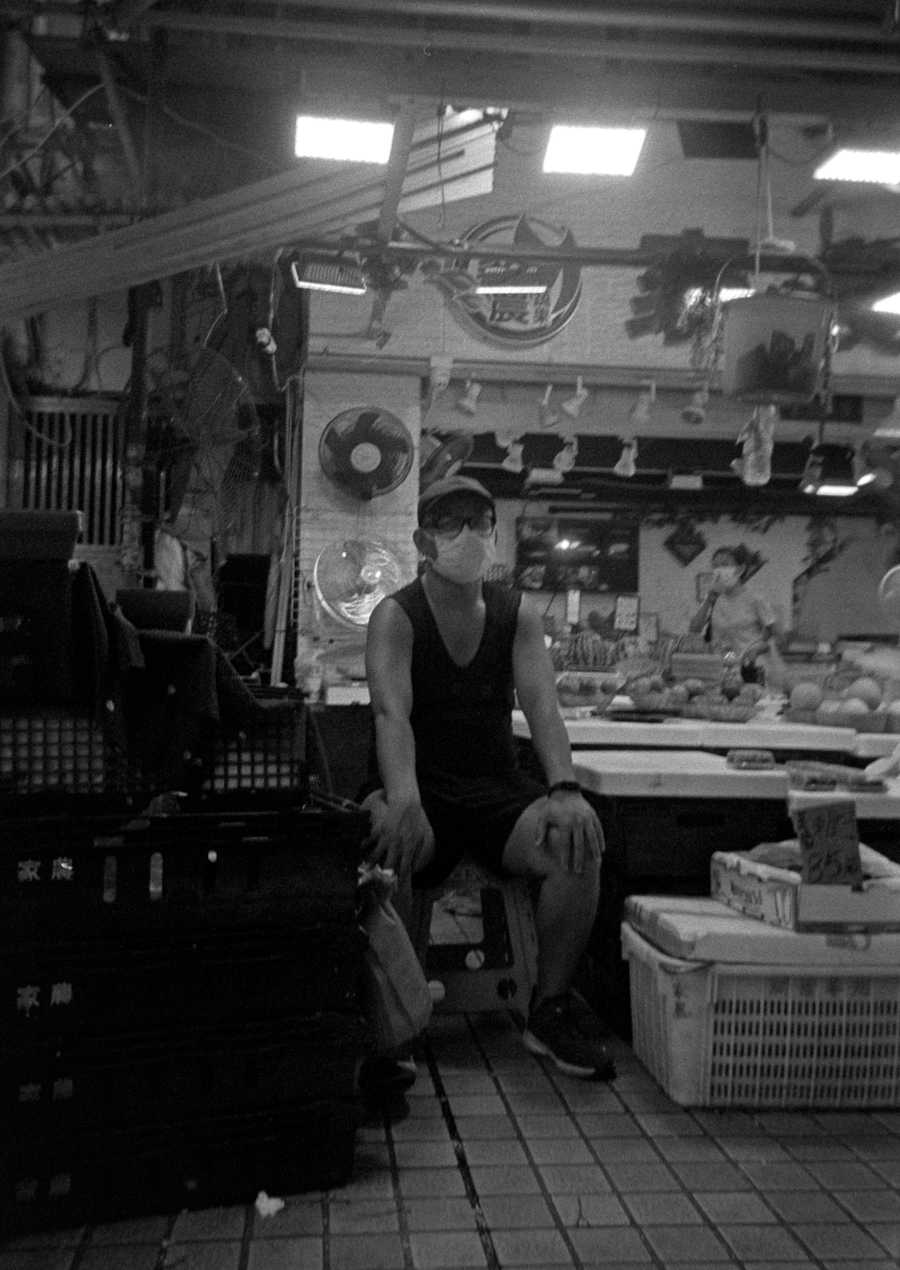 Even in slightly worse lighting conditions, good film will let you get some detail out from the scene. Ilford PAN 400

Surprisingly, it's not bad at all. As in, sure it's not super sharp, but it does feel like 400-speed film is a bigger issue at hand than the optics.

Of course, I cannot say anything about the quality of bokeh - as it's not a thing with that. Maybe the front background blur is a thing - but is that ever beautiful?

Simple to use, relatively wide angle, seems alright for street photography. Moody shots, not too muddy. 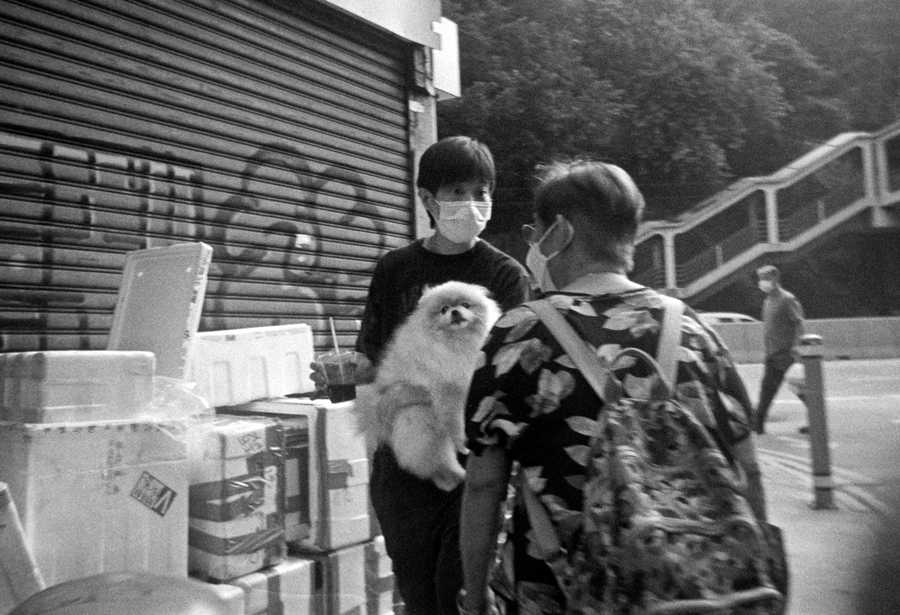 Makes you more courageous with street photography. And you can throw it in anywhere, it's pretty discreet. Very specific usecases - yes, but on the other hand, you can put it in your bag and essentially forget - until the moment comes, when you just grab it and press. Less is more. Disposable nature of the device also makes for disposable shots, but may let you get away with things you wouldn't try with your other equipment.

And you know what they say.

The Void, and the best camera is the one you have on yourself.

You could've made a worse choice than this disposable.